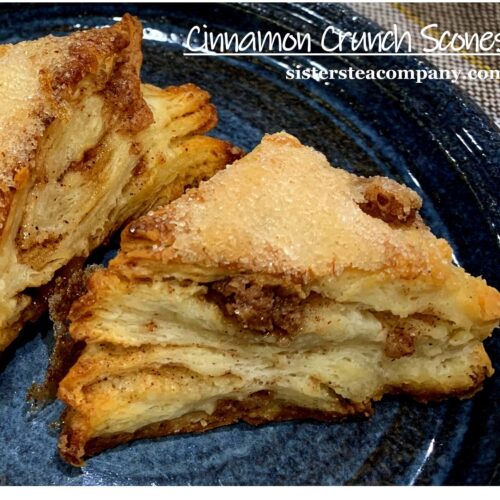 When I crave sweet scones, I want these Cinnamon Crunch Scones with Homemade Cinnamon Crunchies. They are cinnamon scone perfection. The scone is tender and flaky with buttery crisp edges and every single bite is filled with a sweet burst of cinnamon. It's those easy, homemade cinnamon crunchies that take it all totally over the top. But don't let the crunchies scare you away, these scones are not hard or time-consuming to make. Plus, follow the pro-tips toward the end of this post and your scones will come out a success every time.Many of the recipes I share like this one were created or customized for our popular tearoom and are all quite special to me. Even though our tearoom is closed, you can still enjoy these recipes at home. I think you’ll find these recipes are for much more than just teatime. It has always been important to me that the recipes I create and use are versatile in their purposes. Meaning my recipes can be prepared to serve as part of an afternoon tea service or made into heartier servings for a hungry family. I hope you try them all and share them with your family and friends. I also hope you get lots of “oohs and aahs” from your special people when you do! There are few things more satisfying to a home-chef than receiving wide-eyed enthusiasm from the ones we cook for.
Print Recipe Pin Recipe
Prep Time 15 mins
Cook Time 40 mins
Course Breakfast, Dessert, Snack, Teatime

How to make the Cinnamon Crunchies 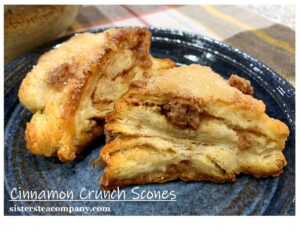 Nothing goes better with a great scone than a good cup of tea! These are some of my favorite teas to enjoy with The Best Cinnamon Crunch Scones with Homemade Cinnamon Crunchies. All of them are available for purchase through our shop at sistersteacompany.com  For naturally caffeine-free options, try one of these flavors: For all of these teas plus many more, I invite you to visit our Tea Shop at sistersteacompany.com. Here you’ll find luxury loose-leaf teas and tisanes, plus helpful—and beautiful—tea accessories.  If you’re not familiar with the world of tea, check out our tea shop—you’ll be amazed at the selection of tea types and flavors. If you’re already a tea enthusiast, you’ll be thrilled, too! Our teas and tisanes are available in 2oz. resealable, airtight bags or 4-teaspoon tasting sizes for sampling. We even have tea samplers for trying a variety. RECIPE KISS TIPS (Keep it Simple Sweetie) and SPECIAL NOTES

Don’t skip this, I promise it’s worth the few extra minutes. You could use purchased cinnamon chips (if you can find them) instead of making the cinnamon crunchies, but the scones won’t be the same. You really can whip the ingredients together in a flash then spread the mixture into a dish. (KISS TIP: line the dish with parchment paper so  clean up is a breeze.) The simple ingredients–which BTW are much cleaner than what you find in commercially processed cinnamon chips–yield the most incredible, crispy sugar pieces. You’ll do a happy little kitchen dance. The cinnamon crunchies truly take these scones to an unexpected level and give the scones a taste that can’t be replicated any other way. If you’ve ever made cinnamon toast in the oven, you can make these!

Every year, about September through November, pumpkin spice blend begins to take over the world! You know, there’s pumpkin spice everything everywhere you look. If you are a fervent PSB fan, try substituting all the cinnamon in the recipe for your favorite pumpkin spice blend. Imagine pumpkin spice crunchies. Now that’s a new spin on PSB! For extra crunch, consider adding a ½ cup of chopped pecan or walnuts to the flour mixture before you grate the butter in. You’ll be adding healthy protein to make these delicious scones a heartier teatime or snack.

Scone dough is unbelievably easy to freeze for a form of quick, bake-off scones. You could freeze the scones after they’ve been baked, but when freezing them unbaked is this easy, you don’t need to. Freezing the unbaked scones makes baking fresh, hot of the oven scones super easy! Plus, they’re so good no one would ever guess the dough was frozen. Your friends and family will be so impressed. To freeze the scone dough follow these simple steps. 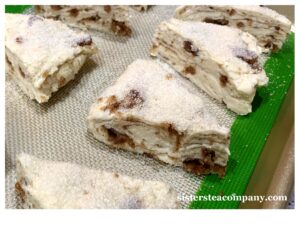 These scones are easy to make, but when making any scone it’s important to know a few tricks for consistent success. Follow these pro-tips for successful scones every time!  1. Accurately measure your flour. Baking requires some amount of precision. Your favorite sauce may come together with a bit of this and some of that. Baking, however, demands specific measurements of ingredients, especially flour. In many cases, you can modify the amounts of sugar, salt and other dry flavorings, but be careful adjusting measurements of flour and fat or you may not like the results. Measuring flour is not a tricky thing. You just need the right tools and some personal restraint. Do not use a liquid measuring cup for measuring flour. Ideally, we would all use weight measurements for our baked goods. I live by the KISS (Keep It Simple Sweetie) adage in my kitchen and prefer to use a quicker yet still fairly accurate method of measuring. It’s not anything groundbreaking and I would safely venture to say that it employs a tool that everyone has in one of their kitchen drawers. A good old-fashioned set of dry-measure measuring cups. You know, the kind where the smaller sizes nest in the larger ones. I said it wasn’t groundbreaking. You’ll find all “measures” of styles ranging from practical and indestructible to cutesy and quite breakable. I’ve had my fair share of those over the years! Regardless, of the actual material, the overall design of these measuring cups allows you to scoop your flour and then level off the excess for a more precise measurement. Not as precise as weighing, but infinitely better than filling a measuring cup meant for liquids with flour and then tapping it until all the air is forced out and the flour sinks to a wildly inaccurate measurement. Tap long enough and 1 1/2 cups of flour can be reduced to what appears to be 1 cup. Using a liquid measuring cup to measure dry ingredients can really skew the measurement and too much flour will yield a dry batch of whatever you’re making. Another good tip is to fluff your flour before measuring any out. Use a fork or even a whisk to put a little extra air back into the flour, then plunge your dry measuring cup into it, pull it out and then run the back of a knife across the surface swooshing the excess flour back into your flour container. Easy and, more importantly, better measuring. 2. Cold butter is a must for making tender, well-risen scones. It’s helpful for all your ingredients to be chilled, but the butter must be cold or even frozen. I recommend keeping a stick or two, or pound or two, of butter in your freezer. Why do you need the butter so cold? As the scones bake, the steam released from the chilled butter helps make the scones tender and contributes to their rise. Colder butter = better scones. There are two ways to easily cut your butter into the dry ingredients. I always try to keep things simple in the kitchen. Remember the KISS I mentioned earlier? Keep methods and processes as simple as you can because it makes baking and cooking so much more approachable. The first method is a breeze if you have a couple of frozen sticks of butter in your freezer. Quickly run that stick across a good box grater into the dry mixture. Use a fork to mix the shredded butter into the dry ingredients. Be careful to not mash the butter into a big, blobby ball of butter, though. Once the mixture resembles coarse crumbs, you’re finished cutting the butter. Easy-peasy and box graters are quick to wash. The second method is my favorite if I’m make several batches of scone mixes at one time. This method requires a food processor but it takes only seconds to cut the butter into the flour mixture. Begin by measuring the dry ingredients into the bowl of your food processor; pulse to combine. Toss in diced chilled butter, then pulse until mixture resembles coarse crumbs. Pour this butter/flour mixture into a mixing bowl and add the wet ingredients. (NOTE: I do not recommend finishing the scones in the food processor. It would make a mess and give your scones an undesirable texture.) I use both methods and like each one equally depending on my end goal. A quick batch for now or a few mixes prepped for later. (To find directions for DIY scone mixes, click here.) Once the butter is cut in, I put the mixture into the freezer for about five minutes to let the butter chill again. 3. NEVER overwork your dough. When combining your dry ingredients with your wet ingredients, use a very light hand with a folding motion. Don’t just pour the wet ingredients into a well in the center of the dry ingredients and then try to stir it all together at once. You’ll wear yourself out and possibly overwork the dough trying to get the elements evenly incorporated. Pour a little, stir a little; pour a little more, stir a little more. Pour any remaining wet ingredients over a dry area. When stirring, use a sturdy spoon or your hands (just be aware the heat of your hand can soften the butter you’ve been working so hard to keep cold). Put your spoon, or hand, to the bottom of your mixing bowl and pull the dough mixture up and over. Continue doing this until it all comes together to form a soft, shaggy dough. Once you’ve turned the dough out onto a lightly floured surface you can knead it 5-6 times to make it more smooth. Then use the folding method of folding the dough over onto itself several times to create layers. Just be light-handed in all of it to avoid overworking the dough. 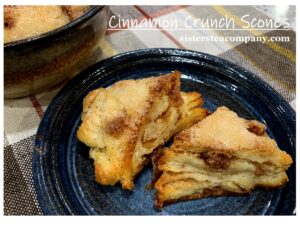 Did you love this recipe?

Have you made The Best Cinnamon Crunch Scones with Homemade Cinnamon Crunchies? Leave a comment and let us know what you think. We appreciate and value your feedback. We’d love for you to share this recipe and pin it, too!  Like this recipe? Try our Apple Pie Scones. They’re tender drop-scones

are filled with a perfectly spiced apple filling. Absolutely delicious. Looking for something savory? Try our amazing Party Perfect Mini Pumpkin Cheese Balls. Don’t worry, there’s no pumpkin or pumpkin spice in these adorable little cheese balls. They’re pumpkin shaped and their flavor is out of this world awesome!

Sign up for our monthly newsletter Versatili-tea and never miss a new recipe. Subscribers are the first to see our recipe collections, new products and receive valuable discounts in our online Tea Shop. We promise no spam, just great recipes, helpful tips and monthly discount codes . Follow us on Facebook and Pinterest, too!

“May the LORD give you (great) increase, you and your children. May you be blessed of the LORD, Who made heaven and earth.” Psalm 115:14